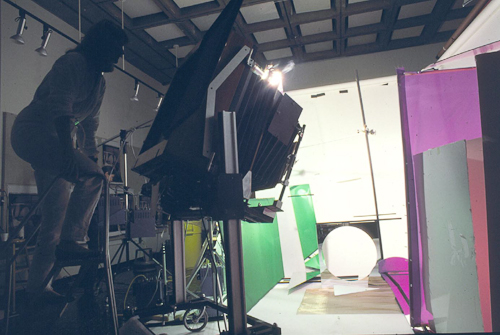 Barbara Kasten began working with the 20×24 camera in 1981, when she was invited by Polaroid Corporation to come to the studio at 575 Technology Square in Cambridge, MA. Kasten had already been working with Polaroid’s 8×10 material and was well versed in the language of large format cameras. The work, at first minimal later evolved into mare complex shapes and colors with textures and rippled reflections replacing the crisp shapes
and sharp edges. Kasten continued her series when the camera moved to the School of the Boston Museum of Fine Arts in 1983 and also the New York Studio in 1986. The images are unique to the camera, taking advantage of the deep space depth of field by shooting at an aperture of f64. the lighting was complex as well, with multiple point sources covered with colored gels. Each color required a different exposure, and due to the close down aperture, some colors needed to be fired up to twenty times. Each exposure was a symphony of multiple colors, each fired according to density. White light might require one exposure, yellow two, red four, green ten and deep blue the most, sometimes up to twenty. The instant feedback was critical here, one could never prejudge how strongly a color would render as it bounced off objects and through silk scrims. The end result was a dazzling combination of abstraction and lush color.

Here is an excerpt of a review of Barbara Kasten’s work from an exhibit at Kadel Willborn in June of 2011 posted on art news.orgBARBARA KASTEN
A matter of perspective
15 May 2011 – 26 June 2011

Barbara Kastens photographs do not narrate and document stories, instead, they are a “print” of the abstract features of light and shadow. In the 1970s she began experimenting with photochemical reactions and photograms, which she painted over using synthetic colors from the cyanotype process.
The works in the current exhibition, A matter of perspective, belong to the “Construct Series” created in the late 1970s and early 1980s. Barbara Kasten built space-filling, abstract installations in her studio made of light as well as colour surfaces reflecting mirrors and metal elements, which she then photographed with 8 x 10 inch and 20 x 24 inch mid-format Polaroids. Each photograph is therefore unique. Barbara Kasten’s Construct photographs depict a kind of constructivist “stage” that changes from photo to photo, but remains abstract and non-narrative.Although Barbara Kasten’s art-historical significance has been confirmed by her being represented in important American collections such as those of the San Francisco Museum of Modern Art and the J. Paul Getty Museum, as well as the inclusion of her works in anthologies on the history of photography, e.g., “Starburst: The History of Color Photography in the 1970’s” and “The Edge of Vision: The Rise of Abstraction in Photography”, her oeuvre has almost disappeared from present-day perception in the USA and particularly in Europe.Barbara Kasten’s working method proves to be highly relevant, both for current trends in the abstract/concrete photography of the younger generation, for example, Liz Deschenes, Eileen Quinlan, Walead Beshty, Peggy Franck or Wolfgang Tillmans, and due to its art-historical connections to early trends in abstract photography as can be found with Lázló Moholy-Nagy, Christian Schad or Man Ray.

Moreover – and this is what makes Barbara Kasten’s position so exceptionally relevant – her abstract pictures are based on the real construction of expansive installations in front of the camera. Thus, in the early 1970s, she already crossed genre-specific borders between sculpture, painting and installation, something which strongly connects her work with the approach of a younger generation of artists.

special thanks to Olivier Renaud-Clément