Analog Instant in a Digital World

One of my former interns asked me to write a few lines on why I feel analog instant is still powerful in our digital world. I thought I would share it with you. Analog Instant in a Digital World When the instant 20×24 format was created in 1976, it was a different world in photography. […] 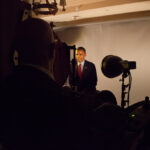 The 20×24 camera has seen its share of Presidents, Vice Presidents and First Ladies. Jimmy Carter was photographed by Ansel Adams in the White House in 1979. Chuck Close photographed Bill Clinton in the Oval Office in 1996 and later in New York in 2005. Timothy Greenfield-Sanders photographed George H.W. Bush after his presidency in […]