Friday, July 6, 2012 Posted in 20x24 Featured Artists, 20x24 In The News
The 20×24 camera has seen its share of Presidents, Vice Presidents and First Ladies. Jimmy Carter was photographed by Ansel Adams in the White House in 1979. Chuck Close photographed Bill Clinton in the Oval Office in 1996 and later in New York in 2005. Timothy Greenfield-Sanders photographed George H.W. Bush after his presidency in Houston in 1997. First Lady Hillary Clinton, Al Gore and Tipper Gore were also rendered in 20×24.
Chuck Close has wanted to photograph Barack Obama since he was a candidate in 2008. There were several chances to do that in New York these past few years but schedules seemed to change at the last minute. Finally the opportunity arose to photograph the President in Washington DC at the Jefferson Hotel. Complicating our lives was the fact that we were already booked to work with Bruce Weber for the We Are Family Foundation the night before in New York City. Normally you would want to have the camera in DC the day before, set up and test thoroughly to be ready for the few minutes we would likely have with the President. Instead, we loaded the truck up at 11:00 pm and our trusty driver Robert Pattison parked the truck in Tribeca and left for Washington at 4:00 am. We followed on the train with Chuck that next morning, arriving at the Jefferson at 11:30 a.m. Robert had already brought in the equipment at 10:00 a.m. for the Secret Service security sweep.
We got up into the room around noon and began to unpack our equipment in the 20×20 foot room provided us. A 20×20 foot space is about the bare minimum to pull off a 20×24 shoot. We need distance from the seamless and we also need additional room for Chuck’s motorized wheel chair to fit behind the camera. Fortunately, we also had another room across the hall where we could put any non-essential equipment out of the way. We set up and tested for two hours before we asked Chuck to come up for further testing. The President arrived exactly on time at 4:00 pm. He was gracious, friendly and quite curious about our large camera with the red bellows. He was a dream to work with, hitting his mark every time, never moving while we focused and generously gave us forty five minutes to get our images, six in color and three in black and white.
The end product here will be digital watercolors from the select color image and a large-scale tapestry from the black and white image. David Adamson of Adamson Editions in Washington DC will print the watercolor editions and Donald Farnsworth of Magnolia Editions in Oakland will create the tapestries. For a closer look at the tapestry process, click here. The day after the shoot we brought the images to David Adamson to be scanned in preparation for the digital watercolors and tapestries. Lyle Ashton Harris, a long time 20×24 artist was in residence at Adamson Editions preparing work for a new show. 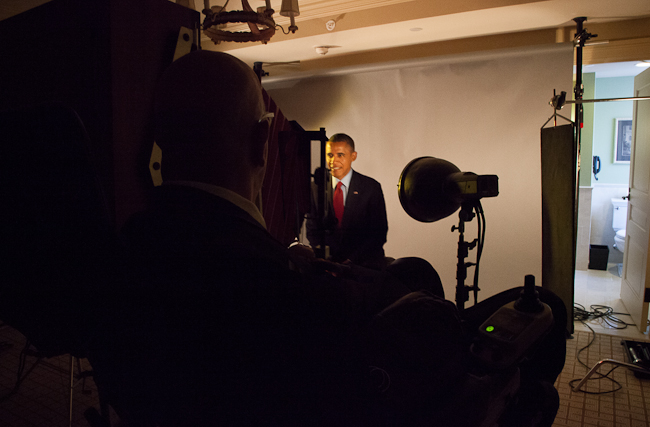