When did the 20×24 Project begin?  1976, when Polaroid at Dr. Land’s direction built the first functioning prototype. This camera was used to take portraits at the 1976 Polaroid Shareholder’s meeting.
Why did Polaroid build such a camera?   To demonstrate the quality of Polacolor II Film. Polaroid was about to release a professional color film in 8×10 format.
When were the 20×24 cameras built?   In 1977 and 1978, Polaroid’s metal and wood working shops built 5 cameras under the direction of John McCann of Vison Research.  Mammoth Camera of Oakland, CA built two new cameras in 2016.
What were the cameras used for?  Polaroid built a studio on Ames Street in Cambridge, MA. This studio contained two studios and a gallery to exhibit the images. Initially, they invited a number of select photographers to experiment with the cameras, in exchange for donating images to the Polaroid Collection. Polaroid also used a process camera version to copy paintings in the 40×80 studio at the Museum of Fine Arts in Boston. Cameras were also sent to Amsterdam and Tokyo.
Where are the cameras currently located?
There are two cameras operated by 20×24 Holdings. One is in New York City and the second is a travel camera. The NYC camera is at our  studio at the Film Society of Lincoln Center.  The third is at 20×24 Studio West in San Francisco. .   The fourth is owned by Elsa Dorfman and is in Cambridge, MA.  The fifth is owned by Jan Hnizdo in Prague, Czech Republic and is currently inactive.  The sixth is being operated by Impossible Project in the Netherlands, also inactive .  A sixth camera, one of the original five is now in the Harvard Museum of Scientific Instruments.  It was a retirement gift to Edwin Land in 1982 and was part of Land’s Rowland Foundation bequeathment to Harvard University. It is also inactive. A seventh camera is in Dusseldorf, Germany.  The 20×24 Studio West camera is not one of the original five, but rather an earlier prototype with a new front end built by Wisner Manufacturing and customized by Mammoth Camera.

What are the specifications of the camera?  The 20×24 camera is a traditional view camera, but has hybrid characteristics of a rail camera and field camera. It weighs 235 pounds and sits on a rectangular frame on wheels that supports a two-column studio stand. The bellows is driven by a telescoping nylon gear that allows bellows extension from 17’’ to 60”. The front standard has 24” of rise and fall, 6” of side to side shift and the ability to swing 4” forward and back. The rear standard of the camera is static and has no independent rise and fall separate from the camera itself. The camera can descend to   24” and rise to a height of 72”.  The camera rear box contains a built in processor with 22″ titanium rollers. It is driven by a geared motor drive powered by a 110v AC motor. Transformers are used for 220 or 240v current.

The New York Studio offers focal lengths of 1200mm, 800mm, 600mm, 360mm, 210mm, and 135mm. Only the 1200, 800, and 600 were designed for the 20×24 format. Translated into inches these are 48 inch, 31 inch, and 24 inch lenses. The bellows of the camera extends from 17 to 60 inches and each of these lenses will provide different levels of magnification at different bellows extension. The 24 inch lens (600) has the most range of magnification, allowing landscapes at infinity all the way up to 1.5 times lifesize. The shorter focal lengths, which are actually 8×10 and 4×5 lenses provide magnifications from 1.5 times life-size all the way up to 10x. As magnification increases, depth of field decreases and subject to lens distance decreases. At extreme magnification, it becomes more difficult to light the subject, because it is so close and the bellows extension factor can lose up to 8 or 9 stops of light.

How is the film put in the camera?
20×24 film is provided on rolls. The negative is supplied as a 150’ roll and sits on brackets at the top of the camera box. The positive is on a 50’ roll and sits on a similar bracket at the bottom of the processor. There are no sprockets in the film and it is moved into position with tab connected to string with adhesive tape. This simple solution was utilized early on and has never been improved on. Above the positive roll in the camera sits a tray that through a chain driven system moves the chemical reagent pods into position between the two rollers where the negative and positive meet. 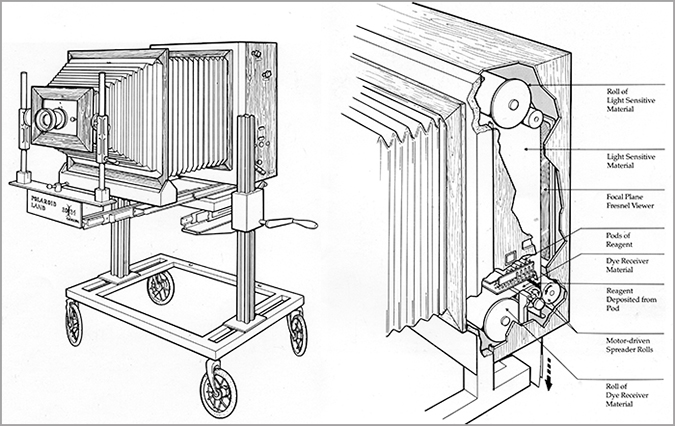 The 20×24 Camera and Processing Back 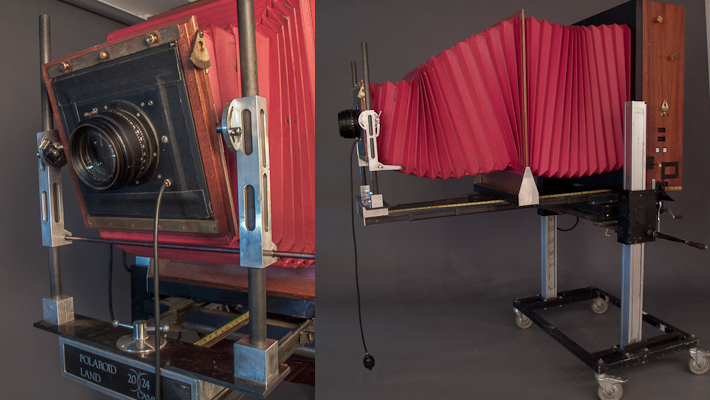 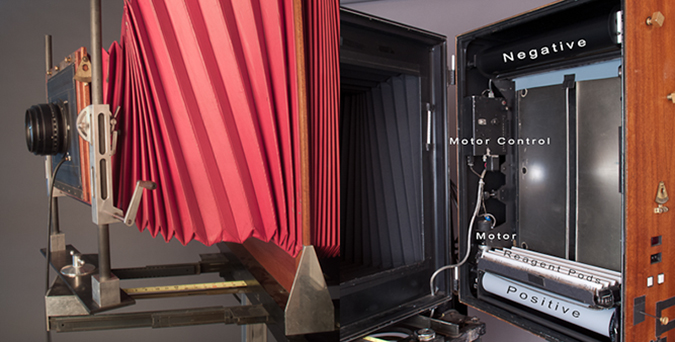 Camera in Swing Mode/ Processing Back

Where do you get your film? 20×24 Holdings purchased over 500 cases of film in raw stock form from Polaroid Corp.in 2009. The negative is kept in cold storage at 38º and the positive is stored in a climate controlled space at 45% relative humidity. The chemicals that make up the reagent are stored in component form and only mixed when needed. Once placed in a pod, the reagent will begin to age.

Ted McLelland, John Boudrow, Rob Young and Tom Silva, are Team 20×24 Holdings. They are shown here with the reagent reactor.

What is a pod? A pod is a foil packet with special seals designed to break under pressure when passing through rollers, allowing the reagent to spread evenly between the negative and positive rolls and begin the development process.
How are the pods made? The pods are produced on a special machine, the only remaining one in the US (Polaroid once had dozens of pod machines in their US factories). It is housed in our warehouse in Ashland, Massachusetts.

How often do you make pods? It is based on demand, so far it is four or five times per year.

What kind of film do you have left? We have Polacolor ER, which was sold by Polaroid as T669, T59, and T809. It is also referred to as P3. This film was a favorite of photographers making Image Transfers and Emulsion Lifts. It has a rather subdued color palette and is excellent for portraits. Our other color film is Polacolor 7, and was sold as T690 by Polaroid. It has a brighter color palette, more contrast and is similar to Fuji FP100C in performance. It is excellent for fashion and still life, many photographers prefer it for portraiture as well. Sadly we are out of Polapan 400, our Black and White emulsion.

How does the 20×24 instant process work?The 20×24 format utilizes the exact same material that Polaroid once produced for all peel apart films from 3 and ¼ by 4 ¼ inches up to 8×10. There were three distinct film types, Black and White, a silver only emulsion and two Color emulsions, Polacolor ER and Polacolor 7. In black and white film the image formation is accomplished through a transfer of undeveloped silver halide, unoxidized developer, and unused alkali to the receiving layer. Once in the receiving layer, the chemicals react to create a positive silver image. The Black and White film that is used in 20×24 is known as “Coaterless”, and does not require the print coater solution that earlier films such as Type 52, 552 and 57 did. The physical makeup of color instant films contains many more components than found in comparable black and white films. The basic structure consists of a black support material holding separate silver gelatin emulsion layers sensitive to red, blue, and green light. During processing, each of these will form its own separate color record as it releases a complementary subtractive dye (the red-sensitive layer releases cyan dye, the blue-sensitive layer releases yellow dye and the green-sensitive layer releases magenta dye). In between these color layers are spacers that contain alkali-diffusible dye developers. Above these dye and spacer layers sits the image-receiving layer, followed by a timing layer that consists of both a barrier and an acid. Lastly there is an acidic mordant layer that will fix the dyes in place. The layers are arranged as such to facilitate the chain reaction that takes place during development. The developer pod in instant color materials contains a strong alkaline reagent in gel, usually made of sodium or potassium hydroxide. The reagent has been made viscous by water-soluble polymeric thickeners and also contains high molecular weight polymers, reducing agents, alkali,as well as components that assist in image formation and stabilization. The pod itself must be inert to strong alkali and able to keep out oxygen and water for long periods of time. The process used by Polaroid known as alkaline induced dye diffusion transfer is outlined here. After the alkaline developing reagent has been spread over dyes, it forms a uniform layer that serves as a “protective colloid” during processing. (The reagent is spread above the light sensitive layers and below the image layer.) The developing reagent then begins to migrate toward the receiver sheet. While the reagent moves, it changes the exposed particles in each layer into metallic silver. It then dissolves the three developer dyes allowing them to diffuse from their original locations toward the receiver sheet. As the dyes move they are blocked wherever the metallic silver exists. Only dyes from the unexposed areas of the film will reach the receiving layer to produce a positive color image. At the same time the developing reagent is moving down toward the light-sensitive layers, it is also diffusing through the timing layer to eventually come in contact with the layer of acid. Here the acid and alkaline combine to form water and salt. In some types of instant color film the developing chemicals may remain on the surface of print while in other cases they are pulled off and discarded. Thanks to Annie Walker of the University of Texas in Austin for her in depth interviews with Polaroid scientists to produce the above information on film technology. You can find her entire paper here.

Will you ever produce your film in smaller format?  No, we are only focused on the 20×24 Format.

Here is a video on the pods being made in 2010.  Roy Johnson, Marc Soufrant, and Ted McLelland produced the run.