Tuesday, March 2, 2010 Posted in 20x24 Featured Artists
One of the more unique artists working with Polaroid 20×24 technology today is Ellen Carey. Ellen first began using the 20×24 in 1982 while it was housed at the Museum of Fine Arts School in Boston. Ellen’s first work was a series of self portraits, lit with colored gels and later painted with enamel paint. These evolved into another series of self portraits made in New York that combined close up portraits lit with colored gels with intricate collages of black and white graphic images.
These multiple exposures blended the abstract and narrative in compelling complexity. In the 1990s Carey moved on to produce the series of “Pulls” and “Rollbacks”. Eliminating the figure altogether, Carey created these abstract images taking full advantage of the camera as a printmaking machine. Exploiting the roll film nature of the system, Carey produced pieces sometimes seven to ten feet in length by letting the camera run beyond its usual stopping point. At times, the positive would be cut away from the negative and “rolled back” into the camera for additional exposures and developing.

You can see more of Ben Lifson’s works and writings at: Ben Lifson 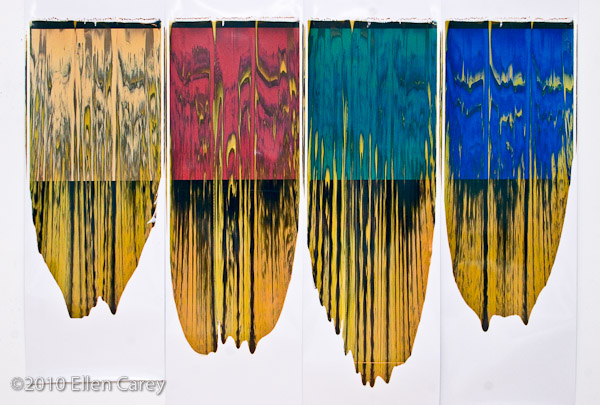