Night of Originals with Bruce Weber, Nile Rodgers and the 20×24 Studio 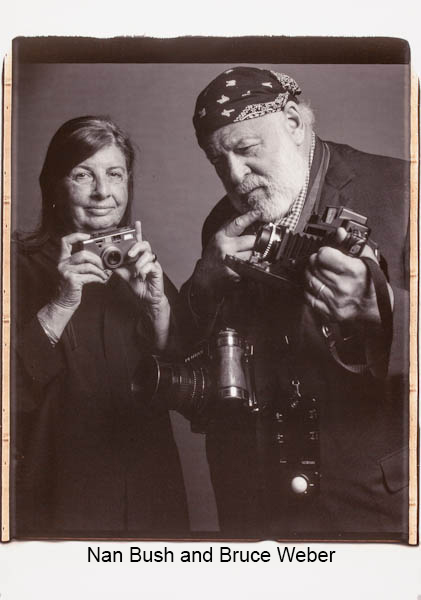 On June 26, 2012, the We Are Family Foundation hosted “Night of Originals” with legendary photographer/filmmaker Bruce Weber and musician/producer and founder of We Are Family Foundation, Nile Rodgers, at the Norwood Club in New York.
An intimate gathering of guests enjoyed a private dinner with Weber and Rodgers that was followed by a black and white portrait sitting with Weber using one of only five 20×24 large format Polaroid© Land cameras in existence and one of the last remaining rolls of large format Polaroid© film – all owned by 20×24 Studio. Each image is a one-of-a-kind – there are no negatives. Weber carefully crafted every image and brilliantly told a story with each one. One of the many highlights of the evening was Valerie Simpson (Ashford & Simpson) and her two daughters, Asia and Nicole, singing “Ain’t No Mountain High Enough” as Weber shot their portrait. This was the first time the family has been photographed together since Nick Ashford’s passing last year. As guests were waiting to have their portraits taken Rodgers performed a one-man show sharing stories about his life, music and the New York underground during the 70s and 80s – as depicted in his critically acclaimed best-selling autobiography, “Le Freak: An Upside Down Story of Family, Disco and Destiny”.
Proceeds from Night of Originals benefitted the We Are Family Foundation and its signature Three Dot Dash Global Teen Leader program that identifies and mentors teen leaders who are actively promoting peace through their work addressing basic human needs worldwide.

Bruce Weber, born in rural Greensburg, Pennsylvania in 1946, became the preeminent photographer of the fashion industry in the 1980s and continues to be one of the world’s most popular and influential photographers. Weber initially pursued theater at Denison University in Ohio, then turned to filmmaking at New York University. Thanks to Diane Arhus, he was introduced to and studied with Lisette Model at The New School for Social Research in the 1960s. He participated in his first group show at The Floating Foundation of
Photography in 1973 and had his first solo exhibition at Razor Gallery in New York City a year later. In the late 1970s, Weber began photographing ads and commercials for Ralph Lauren and Calvin Klein. His photographs have since appeared in Va n i t y Fair, American Vogue, Interview, Italian Vogue, and GQ, among many others. More than 15 books of Weber’s work have been published. His photographs are in the permanent collections of London’s Victoria and Albert Museum and the Museum of Modern Art in Paris. Weber has exhibited at venues including the 1987 Whitney Biennial in New York City, Musee de l’Elysee in Lausanne, Switzerland, Palazzo Fortuny in Venice, the Florence Biennale, the National Portrait Gallery in London, the Parco Exposure Gallery in Tokyo, Fahey/Klein in Los Angeles, Galeria Corso Como in Milan, and the Russell Senate Building in Washington, DC.
Bruce is a dedicated film shooter so it was extra special to have him work on the 20×24 camera. Analog film cameras were in abundant supply as Buuce and Nan, Dan and Nanna Stern and Bruces’s assistants Mike Murphy and Chris Domurat posed with cameras.