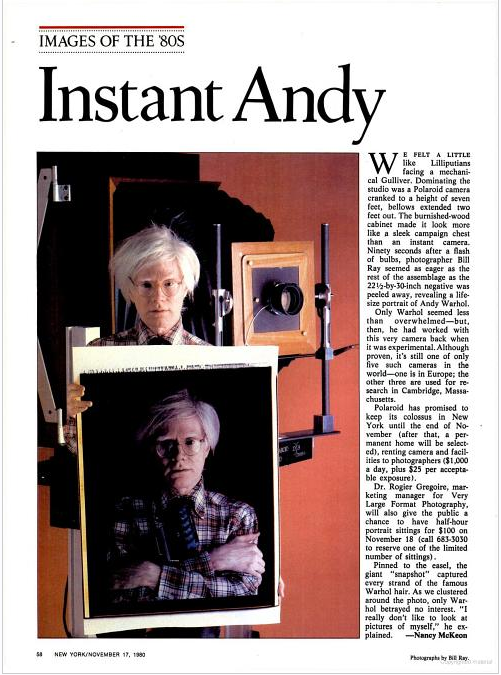 New York: We felt a little like Lilliputians facing a mechanical Gulliver.  Dominating the studio was a Polaroid camera cranked to a height of seven feet, bellows extended two feet out.  The burnished -wood cabinet made it look more like a campaign chest than an instant camera.  Ninety seconds after a flash of bulbs, photographer Bill Ray seemed as eager as the rest of the assemblage as the 22 1/2-by-30 inch negative was peeled away, revealing a life-size portrait of Andy Warhol. Only Warhol seemed less than overwhelmed – but, then, he had worked with this very camera back when it was experimental.  Although proven, it’s still only one of five such cameras in the world — one is in Europe; the other three are used for research in Cambridge, Massachusetts. Polaroid has promised to keep its colossus in New York until the end of November (after that a permanent home will be selected), renting the camera and facilities to photographers ($1000 a day plus $25 per acceptable exposure). Dr. Rogier Gregoire, marketing manager for Very Large Format Photography will also give the public a chance to have half-hour portrait sittings for $100 on November 18. Pinned to the easel, the giant “snapshot” captured every strand of the famous Warhol hair.  As we clustered around the photo, only Warhol betrayed no interest.  “I really don’t like to look at pictures of myself,” he explained.